This course is available with audio narration.

To listen, click the icon to the right to begin the audio track.

This Module may contain material reproduced with permission from NFPA 96-2017, Standard for Ventilation Control and Fire Protection of Commercial Cooking Operations, Copyright© 2016, National Fire Protection Association.  This material is not the complete and official position of the NFPA on the referenced subject, which is represented only by the standard in its entirety which can be viewed for free access or purchased through the NFPA web site at www.nfpa.org (http://www.nfpa.org/).

NOTE: This material has not been reviewed, approved or endorsed by NFPA.  NFPA is neither a sponsor of nor affiliated with KEC Concepts and has neither endorsed nor approved of the goods and/or services of KEC Concepts.

It is the position of KEC Concepts LLC and its affiliates that it will not be the leader, trainer or have the perception of implementing an official safety program for an organization, whether the safety material is for technicians, managers or business owners.  KEC Concepts LLC and its affiliates can offer and provide educational material and direction to OSHA documents/regulations/hazard assessment material for the participant to improve your safety program. This content is not intended to serve as an organization’s official company safety program 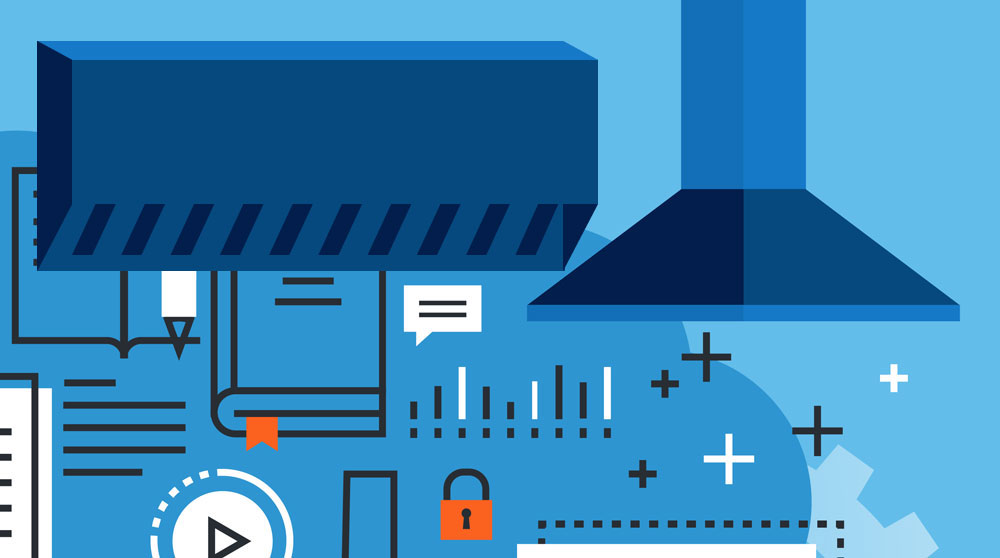 Welcome to the KEC Concepts new employee on-boarding course about Hoods. The educational content of this module was created to introduce new kitchen exhaust cleaning professionals to the following topics:

A quiz on this material will follow the presentation.

WHAT ARE COMMERCIAL KITCHEN EXHAUST SYSTEMS?

Commercial kitchen exhaust systems create a better environment for the occupants in the kitchen by efficiently removing contaminated air from the immediate cooking area and replacing it with clean, comfortable air. 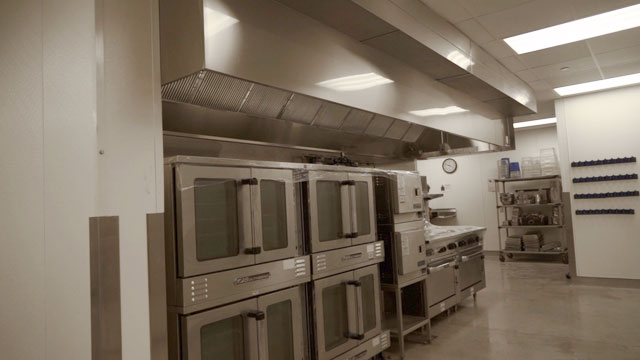 A hood canopy is basically a device that is hung from the ceiling and covers all of the cooking equipment under it.

The hood canopy commonly referred to as “the hood,” is the most visible part of the kitchen exhaust system.  The hood plays an integral role in the effectiveness and efficiency of the system. It’s design, size, construction, maintenance, and cleanliness are essential characteristics for optimum productivity and safety.

The hood canopy  is designed to collect and trap cooking vapors and residues and functions as the primary point of collection for effluent. Effluent is created by cooking equipment and defined as clouds of smoke, heat, grease laden vapors, gas, odors, fumes and steam. It is generally known as all the “bad elements” in the kitchen that require removal by the exhaust system.

The hood canopy is the first component of the ventilation system to capture the harmful effluent. As the process continues, polluted air flows through the system components including filters, or grease extraction devices, which help restrict air and create velocity. Then it travels through ductwork that aids in containing and directing air to the fan unit. Polluted air may then travel through a pollution control device (if required by the AHJ), and finally through a fan unit, which creates air draft and air velocity. The exhaust air is then expelled or dismissed out of the system into the atmosphere. 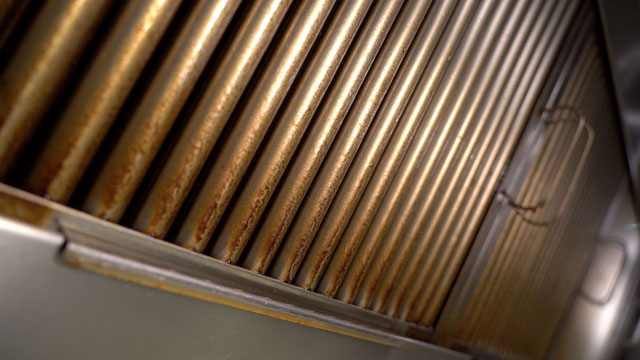 As the bad elements (which are mostly CO2, heat and odorous cooking vapors) are removed from the kitchen environment, grease laden vapors containing solid particles are also removed and collected by grease removal devices.

A hood canopy is a device designed to direct and capture grease -laden vapors and exhaust gases created from cooking appliances.

Let’s begin our discussion by defining some terms we will use throughout this module.

*All above-noted definitions are referenced from NFPA 96 2017

WHAT ARE THE PARTS OF THE HOOD CANOPY?

While different hood designs may have some unique features, most exhaust hood canopies are built for grease application and share four common features; filters, grease drip pan, trough, and plenum.

Filter – a removable device of a kitchen exhaust system designed to capture grease and direct it to a safe collection point. 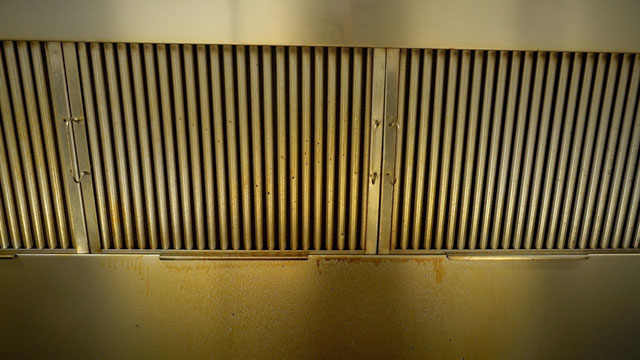 Grease Drip Pan – the safe collection point usually at the end of the grease trough. Trough – Commonly referred to as the bottom filter rail or filter guide, the trough is a long, narrow, gutter-like structure designed to capture  grease and oil. 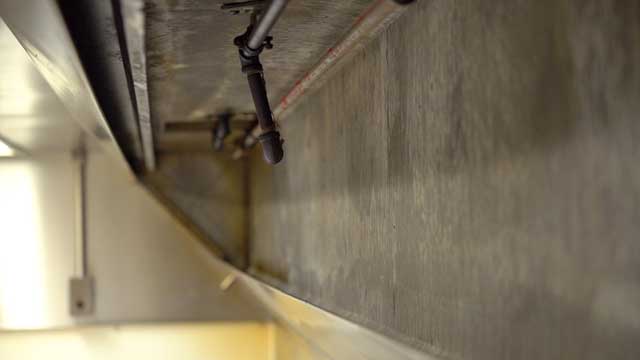 Plenum –A plenum is the area behind the filters where air flow is collected and moves through the exhaust system by a change in pressure. 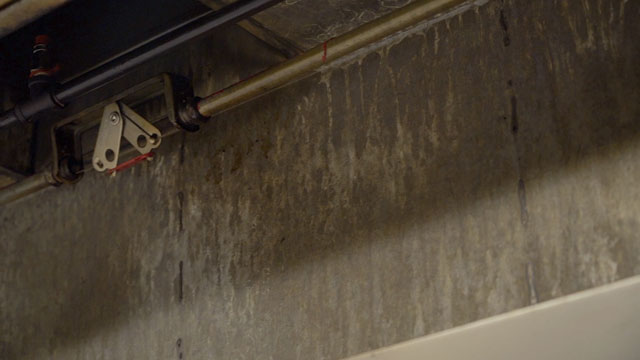 There are two categories or types of hoods:

Hoods designs are categorized as AIR or WATER Hoods. Air hoods move air through a grease removal device or filter. Water hoods incorporate a series of baffles that cause changes in airflow direction, allowing the grease to drop out of the air stream and depositing in the wash plenum. The accumulated grease is removed by a wash system using hot water and detergent to clean during a set wash schedule, usually when the system is shut off.

DID YOU KNOW?Kitchen exhaust air hoods have two basic designs: 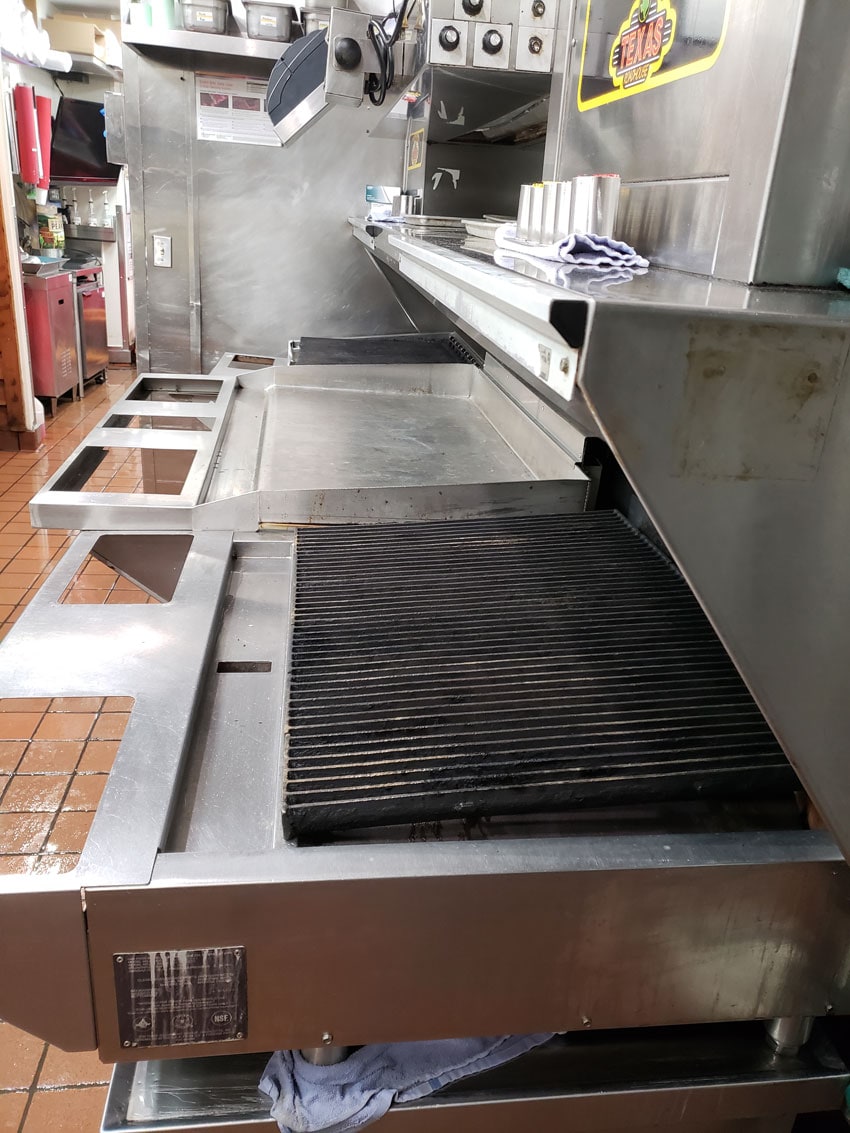 An example of a backshelf hood above a charbroiler. 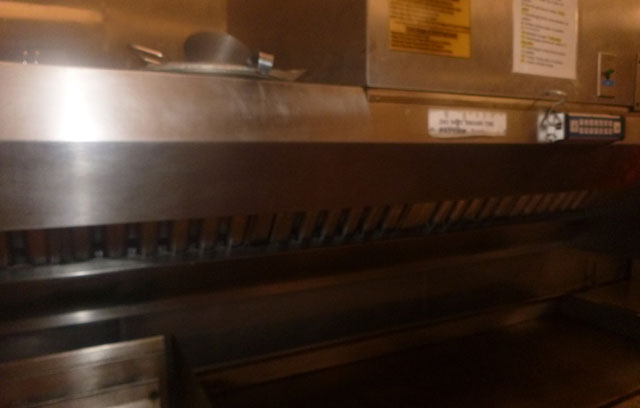 This is an example of a back shelf hood canopy

The distinguishing factor of a canopy hood is that the canopy hangs over the cooking equipment with enough extension to collect the plume of effluent and exhaust it out of the system. The overhang of the canopy is typically at least 6” past the cooking surfaces. The overhang can be more than 6″ for appliances that emit larger plumes of effluent. 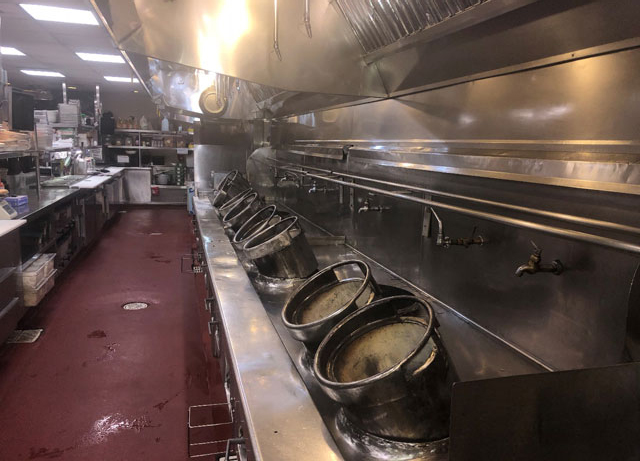 This is an example of a wall mount canopy hood.

Wall-Mounted Canopy – Wall-Mounted Canopies are a very common style of a hood canopy installed against a wall. The wall helps to develop the plume of effluent so that airflow can be very efficient and functional. Single-Island Canopy – A Single-Island Canopy is a common design, installed as an island in the middle of a kitchen. Airflow balance and correct canopy size over commercial cooking equipment are critical on this type of canopy for proper exhausting due to the lack of the wall. 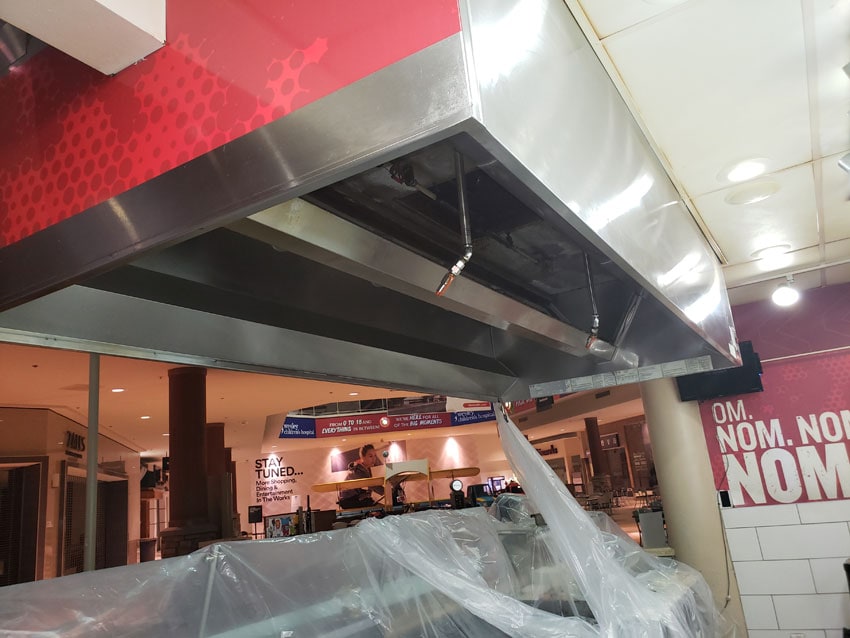 Eyebrow Canopy – This unique style of hood canopy is used mostly in bakery-oven, smoker and dish-wash applications in a kitchen. It can be identified by the hood canopy which usually hangs directly over a specific piece of equipment and is designed to capture effluent when the equipment doors open.

Safety should always be our top priority on the job site. Hood Canopies can be constructed with sharp edges and have many different clearances based on their unique application. Wearing proper personal protective equipment, or PPE, when on a job site is crucial to your safety and preventing injury. In 2016 there were 5190 deaths and 2,857,400 injuries and illnesses in the workplace. Reference OHSA Always wear hardhats and eye protection when working in an around the kitchen area with a hood canopy. Don’t become a statistic.

Your employer should provide you with PPE and training on its proper usage to ensure a safe work environment. If you have questions concerning the specific safety program for your company, you should ask a supervisor.

Water Wash Hoods are designed to remove up to 95% of grease particulate from the air stream without the use of filters. Grease particulate is extracted by centrifugal force from the air stream through a series of baffles. As the high-velocity air stream is forced to make a series of turns, the droplets of grease are forced out and deposited on to the baffles. The accumulated grease is then removed daily during the wash cycle with hot water (140°F minimum) and detergent. The collected grease is washed away by utilizing a series of nozzles.

DID YOU KNOW?Modern technology has developed water wash hoods to clean themselves in place. Wash cycles can be set to wash away the accumulated daily grease from the filters internal baffles while the hood is in operation or while cooking occurs. The wash cycle can occur several times a day depending on the cook-load or volume of grease produced. The hood plenum is washed each time the fan shuts down.

With the increased demand for energy conservation and efficiencies in the operation of commercial kitchens, manufacturers are producing hood exhaust systems to adjust fan speeds depending on cook-loads. Demand controlled kitchen ventilation in commercial kitchens involves controlling the exhaust and make-up air volume of exhaust hoods based on the actual demand. When equipment is idle or little ventilation is required, the fan motors slow down to significantly reduce energy use. With the use of temperature sensing devices or measuring thermal currents, hoods can adjust air volumes with motorized dampers in the outlet collars of each hood. Some hood systems incorporate auto start and shut down features that allow selected hoods to remain idle while other hoods operate at 100% capacity within the same system. These hoods operate along with the building supply air and automated building controls. Canopy lighting can also be turned on or off during idle periods for further efficiency and cost savings. 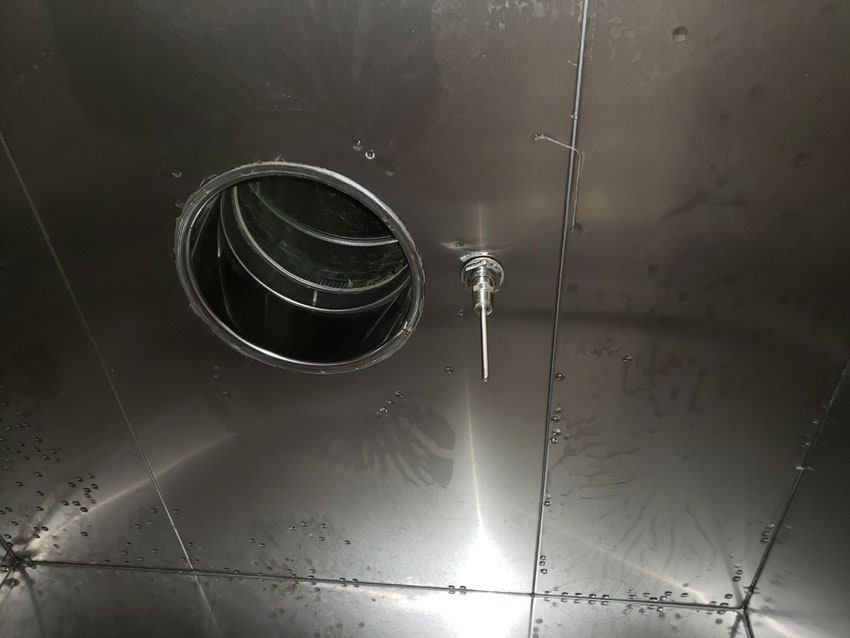 Sensors may be mounted at the top of a hood as well.

As kitchen exhaust cleaning professionals, great care should be taken during the cleaning and maintenance process to protect any canopy sensors and other components that could get wet or damaged.  Make sure that you follow manufacturer’s guidelines and proper precautions with these components. 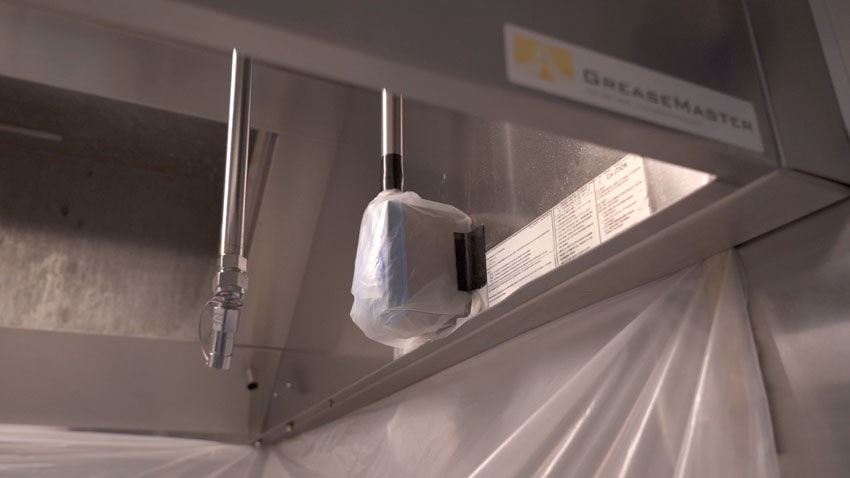 A DVC sensor covered during cleaning to prevent damage

Ventilated Ceiling Technology (VCT), is a relatively new concept in commercial kitchen exhaust systems. A Ventilated Ceiling System configuration includes a series of modular exhaust pod(s) installed in a grid. The system can be custom configured to suit a variety of commercial cooking operations and accommodate the addition of integrated lighting and supply air diffusers. With VCT the entire kitchen can become a cooking space without the limitation of hood canopies.

In a VCT environment, the entire ceiling acts as the ventilation system for supply and exhaust air. The benefits of VCT include a clean and sanitary appearance, highly efficient operations, low noise, low humidity, and a visibly pleasing work area for the occupants. 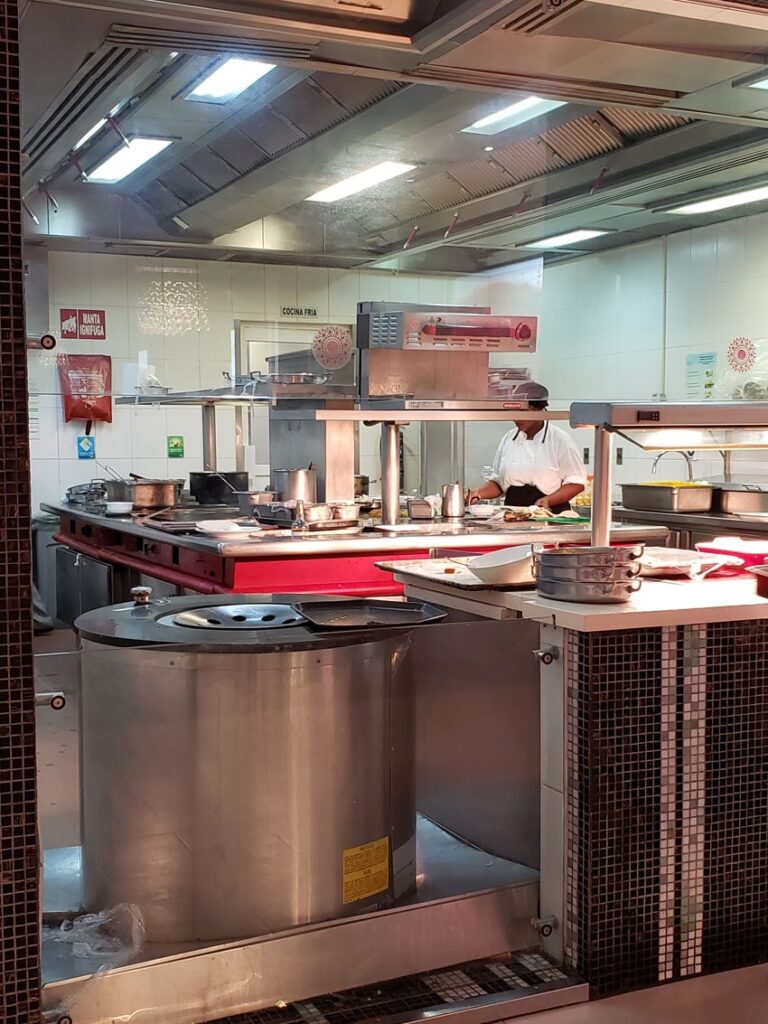 An example of a VCT system

Any deficiencies or non-compliance issues concerning the hood canopy should be identified and noted on the service project report and written notification should always be provided to the system owner as soon as possible.

To be efficient and effective, a kitchen exhaust ventilation system needs to remove contaminated air and bring fresh, clean air into the kitchen area. This “circle of air” is vital to the comfort of the employees and the productivity of the kitchen operation. 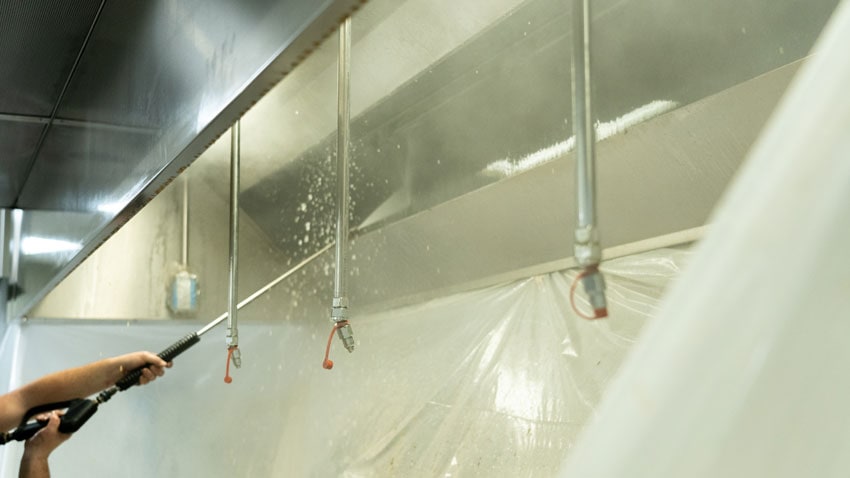 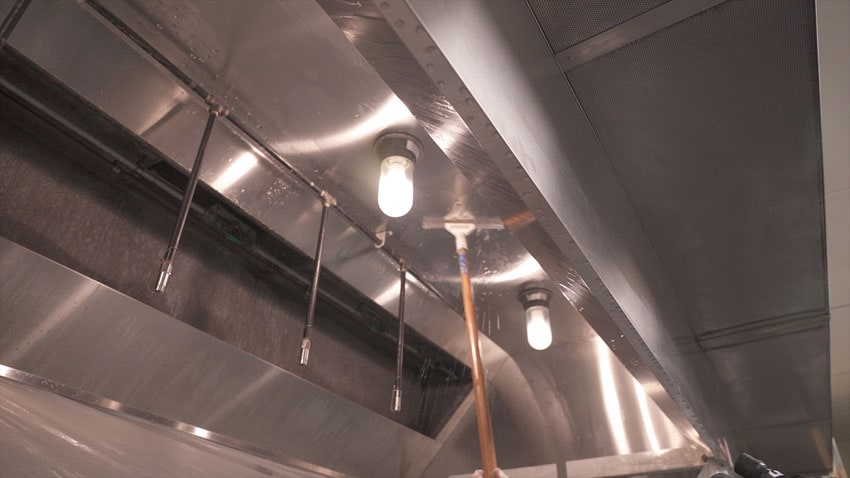 Examples of hoods in the process of being cleaned

Hood canopies, whether Type I (grease) of type II (no grease), are an integral part of the kitchen exhaust ventilation system. It captures all the harmful elements that are byproducts of the cooking process and helps to filter and remove them from the airflow.

Hood canopies come in different types, designs, and styles such as:

Different hood types, designs, and styles of hood canopies help restaurant owners and facilities managers meet the specific requirements of a commercial kitchen and the exact kind of cooking being done.

As technology advances into every aspect of our world, ventilation control is no exception, and as a kitchen exhaust cleaning professional, you will encounter these components in our field experience.  Things such as Water-Wash Systems, UV Technology, Demand Ventilation Control, and Ventilation Ceiling Technology are becoming more and more prevalent in kitchen designs and operations.

You are now ready to take the quiz on Hood Canopies. You must score 100% to move on. Should you need to review the material again, you can do so by starting the module over. Good luck